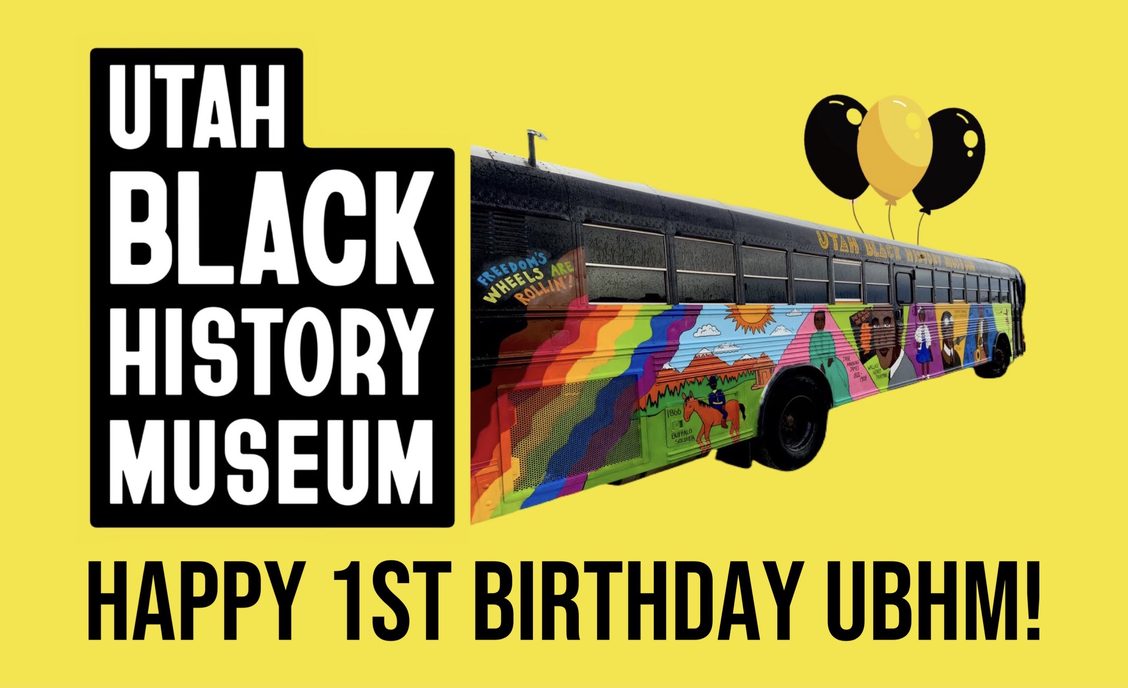 It seems fitting that after one year on the road, now that we’re standing on our own [501(c)3!!! nonprofit] organizational feet (or wheels?), we finally create a newsletter!

If you haven’t yet heard, there has been a Black History Museum rolling around the state.

As most of you signed up for this newsletter while visiting one of our exhibits, you’re at least that far in the loop to know that we, in fact, exist. Sometimes that’s hard to prove because the bus appears like magic when scheduled and we have no brick-and-mortar point on the map . . . YET. But we are real. This is not a figment of your imagination.

We’ve decided to call this correspondence The Muse. In a way, these newsletters will serve as the History of the Utah Black History Museum. Through these messages we’ll be reaching out to you with

After one operating year, this weekend as we celebrated our birthday was a time to reflect on all that’s happened in the past year. I hope you’ll forgive me for sharing this story from my point of view from the point when I got involved. The concept of this museum and a lot of groundwork happened two years before I stepped into the chaos. But I want to catch everyone up on how the museum came to be and some of the events that led us to this point.

HOW THE BUS CAME TO BE

This is a long story, so get comfortable.

Open scene with Lex Scott, Black Lives Matter Utah Chapter leader emeritus, who was a big fan of the Black Lives Matter mural a team of artists painted at Salt Lake City Hall. I had the honor to be one of those artists on that gargantuan project. Lex subsequently asked if any of us might be interested in painting the exterior of a gigantic school bus she had the idea to turn into a mobile Black history museum that, if I’m remembering correctly, had been sitting in a lot for TWO years up to that point.

I was like, this is a great idea, yes, I’d love to do it. So in September 2020 artist Gretel Tam and I each picked two sides of the bus and drafted designs that Lex and Tarienne Mitchell, our historian (who prepared SO much of that groundwork I mentioned earlier) approved. October 10, 2020: A group of us met on a Saturday to prime the bus gray, then paint it with a base layer of black. Volunteers had taped and sanded the bus (Kevin Mulligan and Co.!!!) leading up to what felt like a ribbon-cutting or a ground-breaking ceremony: the very first paint application. It’s kinda scary to take a paint sprayer to a vehicle, if you’ve never done it before. Not really an everyday activity. 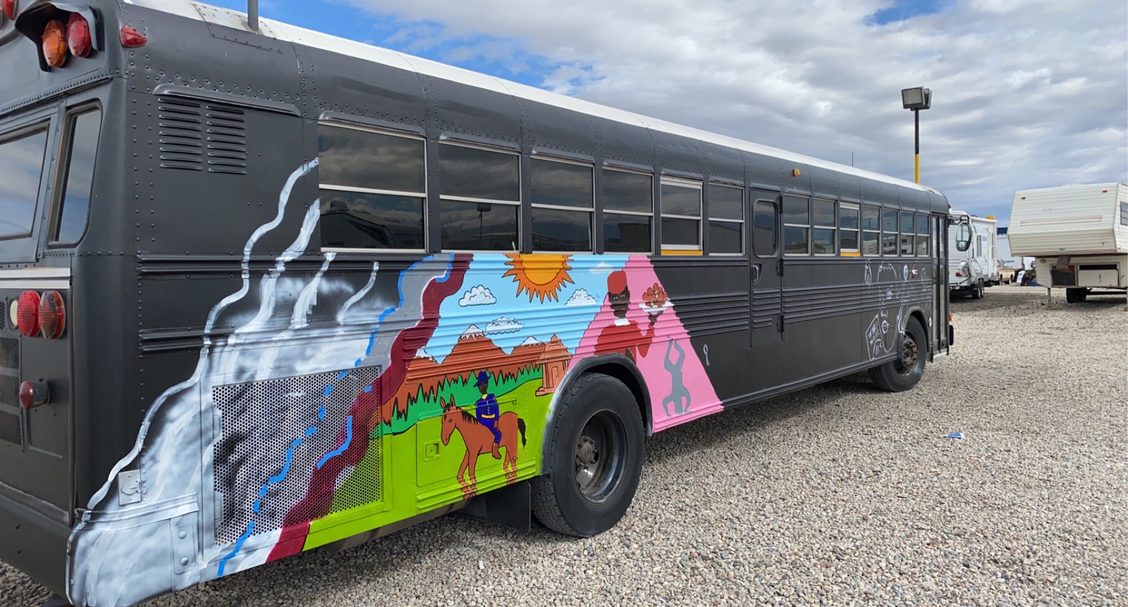 October 11, 2020: Artwork started going down. The waiter holding the plate of chicken ended up being painted over because we decided to highlight and focus on depictions of Black excellence on the exterior. Not that you can’t excellently prepare and serve fried chicken. Fried chicken IS AN ART. But there’s a lot of slavery and servitude and racism to process when you even glance at Black history, so we gave that Coon Chicken Inn (come see our exhibit to learn more about that SLC landmark restaurant!) waiter a little break from dishing up fried chicken for everyone and highlighted specific historical figures. 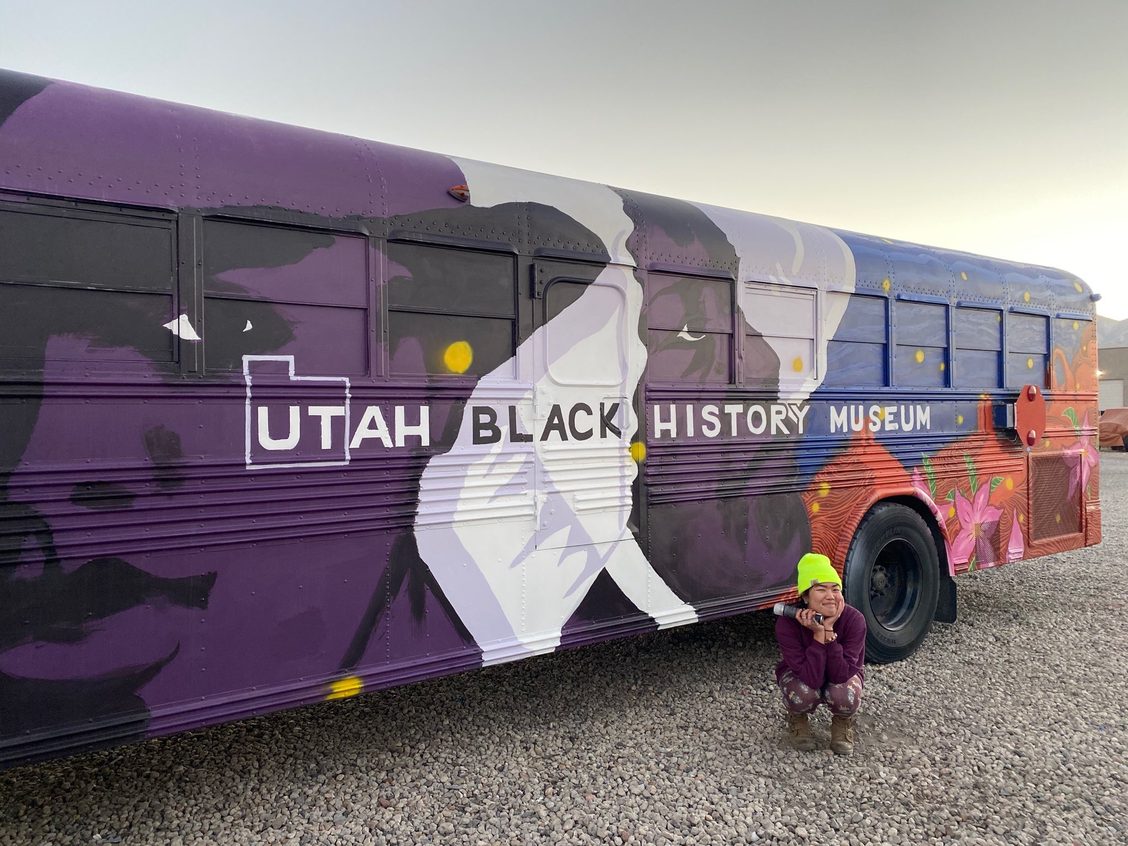 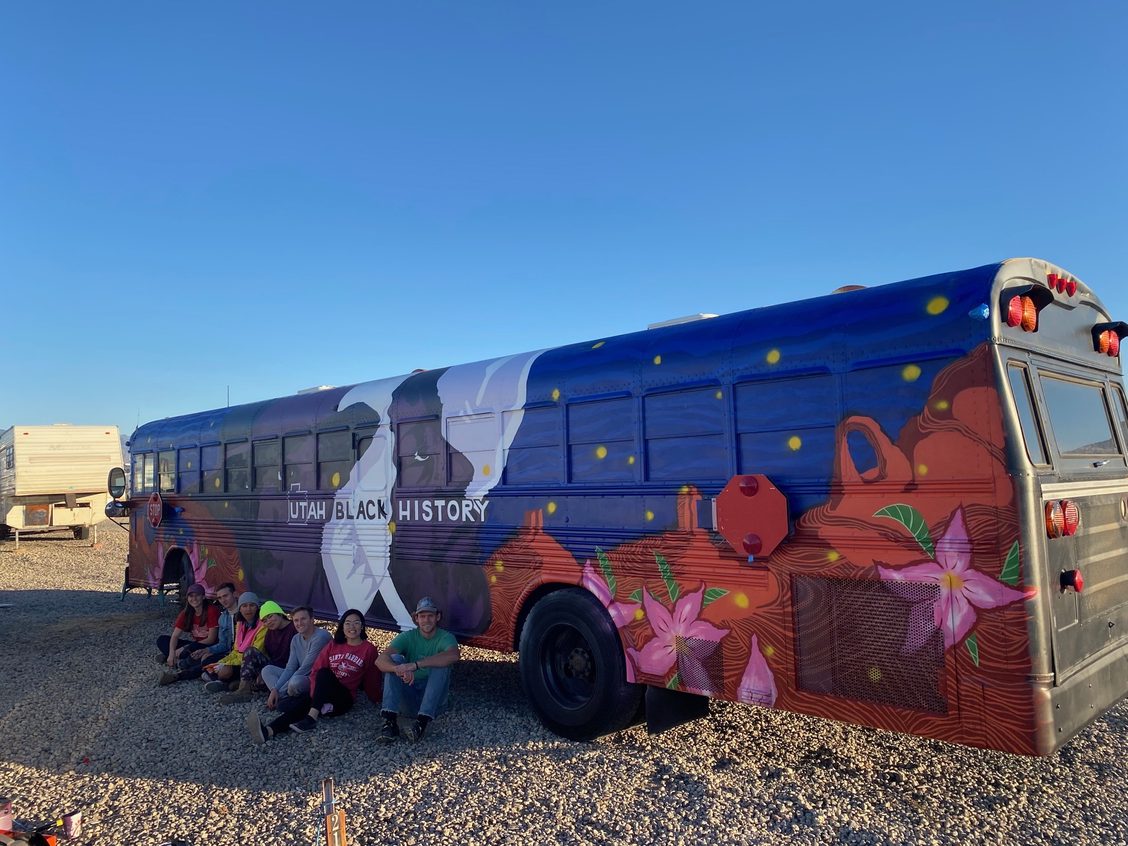 October 31, 2020: Gretel had an awesome team with her and they cranked out the driver’s side and front of the bus on a single Saturday! It’s this gorgeous red-rock landscape with the profiles of Jane Manning James and Wallace Henry Thurman in front of a deep blue night sky lit with (one of my favorite details) little spray-paint-puff-ball yellow stars in the sky. And the pink wild flowers have the same yellow spray-paint-puff-balls.

Meanwhile, I was like Ms. Super Slowpoke, and while I had a few people roller and dabble some paint on with me on a couple occasions, I mostly visited the bus alone a few times a week through the month of October, pulling my van up next to it, rolling down the windows, and playing music while I painted. Listening to music while painting is one of my all time favorite pastimes, taking me back to my high school AP art days sketching to the Smashing Pumpkins. The Band Camino was the soundtrack for this project.

I slowly illustrated the exterior one character at a time starting with the Buffalo Soldier on the left, chronologically working my way over to the passenger door with Jane Manning James, Wallace Henry Thurman, Ruby Bridges, my great uncle Alexander DeCoux the Tuskegee Airman, Joe McQueen, and Ballet West principal dancer Kat Addison on the right.

A note about Kat — she actually helped me paint both the Black Lives Matter mural and the bus. I play string bass in the Ballet West Orchestra (my main gig) and we met at work and became closer especially after the murder of George Floyd. His death changed the course of my life. I mean, it rocked the whole world, especially for the African American community. And with Utah’s Black population being less than 2%, it’s hard to fly under the radar here. Since 2020 people have been more interested in the perspectives and offerings of people of color than ever before. A lot of unique opportunities have come up as a result. It is intense sometimes to accept invitations to represent an entire demographic, especially during times of unrest and mourning, but the challenges are often worth accepting. November 7, 2020: I finally signed off on my side of the bus. It started raining — a good cue to wrap it up. We had planned to finish painting the bus before it got too cold with winter coming and move on to the next steps. 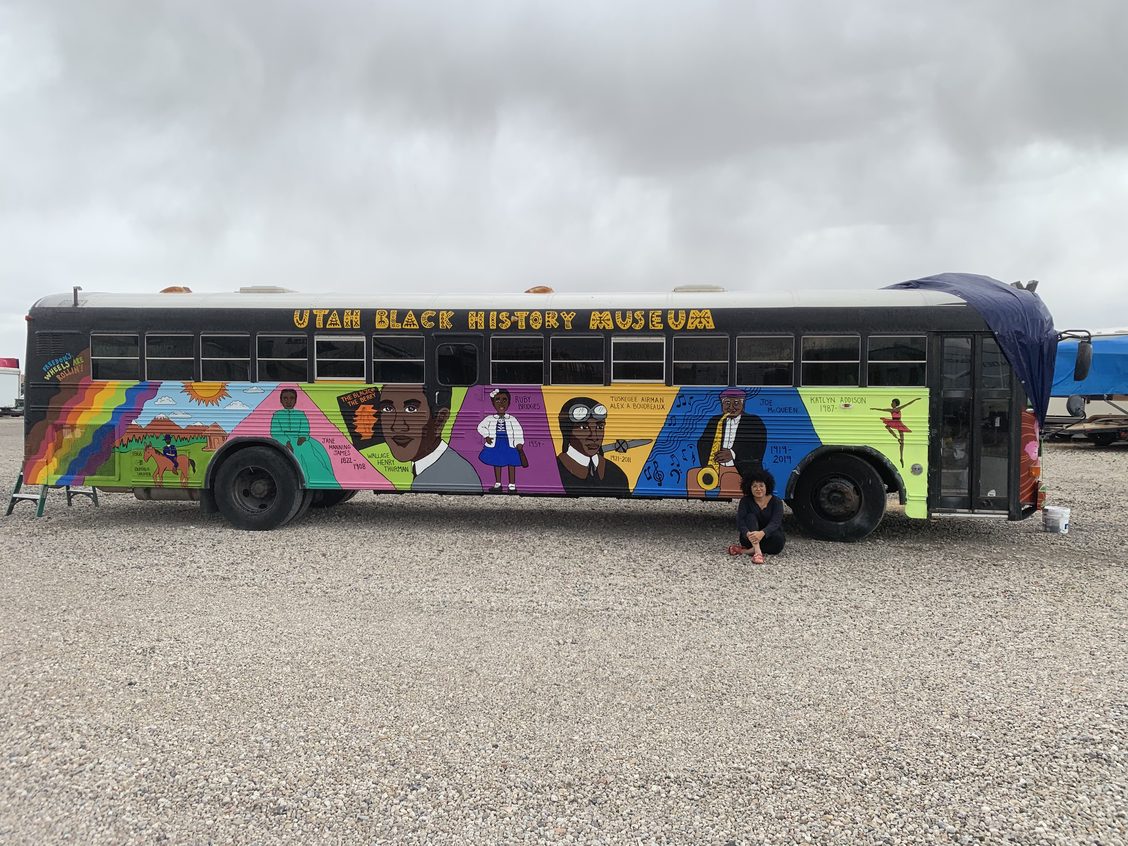 Once the bus was painted, I was so eager to keep the momentum going! I was like, what’s next? Should I paint the interior? What’s the plan? What can we get done with so many Black Lives Matter Chapter volunteers eager to help?

Early on I had said that I wouldn’t paint the bus if it were just going to sit in a lot. I was willing to jump over whatever hurdles were in the way to launch the museum and get the bus on the road. The team agreed to the goal of launching in February 2021 for Black History month. In November we started exhibit display construction and gathering more artifacts. Meanwhile, Tarienne was working tirelessly on the informational displays — the bread and butter that shares specifically Utah’s Black history.But a big hurdle was funding. We couldn’t fundraise until we established ourselves as a 501(c)3 nonprofit, which, once you start working on the process, can take months to gain approval from the IRS. I started working on that with Barry the lawyer. You have to do stuff like establish an official board and articles of incorporation and fill out lots of documents and get lots of signatures, turn it all in to the IRS and then just . . . wait.

In the meantime, we had to be scrappy and put together what we could with the resources we had. So many volunteers helped make it happen — thank you thank you thank you to all of the volunteers for your great help and the hours you put in as we put the original exhibit together. We brought together really unique artifacts, the informational posters with the Utah history Tarienne researched and prepared, clear plastic display cases with homemade fabric-wrapped wooden bases, wooden stands that we use to hold up our moveable walls, tables, our logo (by Joel Feldt featuring a font by Black designer Tré Seals of Vocal Type Co.), branding prepared by Kev Nemelka that Lex had printed on beautiful banners and tablecloths. Nick and Tabitha Davis were and are continually so helpful with the exhibit build. There were so many others who contributed so much important work to make it happen. Hannah Barrett, Marlo Pratt, Larene Orgill, mechanic Blair Lampe. And of course, Mario Mathis, our museum CEO/President, who has had our backs and supported the project the whole way through. This has been a huge group effort. My sincerest apologies for those volunteers we haven’t mentioned by name!

Group projects can be really, really hard. Divvying up tasks, coordinating efforts, and especially creating a unified vision are really challenging endeavors, especially when the possibilities are endless and you’re starting with such a brilliant seed of an idea (Lex!) but you have to grow it one step at a time. So many of us had moments feeling frustrated, defeated, challenged, and near the brink of just plain giving up. Thank you most of all to everyone who kept believing and encouraging us to rise to the challenge and keep going, keep working towards fulfilling our mission. This is our official mission statement:

The Utah Black History Museum is committed to promote the understanding, appreciation, and advancement of the Black experience in Utah through programming, exhibits, and activities that teach local and national Black history and celebrate the culture of the African Diaspora in the United States.

Let’s end there for today. As some of you may know, I have five young boys between the ages of 2 and 11, including 4-year-old twins. Whenever I work on the museum or anything museum related I typically have a babysitter OR my kids are fending for themselves and destroying the house. Right now it’s the latter. I can hear their footsteps smashing crunchy snacks into the rug fibers.

OMG. My oldest just shouted and ran upstairs to tell me that the 2-year-old just DUMPED A JUG OF CHOCOLATE MILK ON THE FLOOR.

Most of my correspondences will probably end with something to that effect.